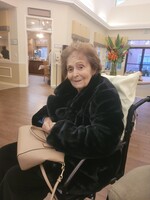 Reine Marie Pearman of Dallas, Texas, formerly of Nashville, Tennessee, passed away peacefully on November 23rd, 2021. She was born on May 28th, 1934 in Alexandria, Egypt to Nicholas Charitoe and Alice Seyad.
After graduating from the Catholica German Girls School in Alexandria, she became a flight attendant for Middle East Airlines. Reine, who was fluent in five languages, then became a translator for Uniroyal in Brussels, Belgium where she met her husband Otto who was on an overseas work assignment. They were married in 1968 and settled in Newark, OH. They also lived in Colombia, SC before moving to Nashville, TN. Throughout, Reine continued her career in the travel industry and she, Otto and daughter Arianne, traveled the world for both pleasure and business.
One of Reine’s proudest moments was when she was sworn in as American citizen in 1971, as she truly believed America was the greatest county on earth. She loved being involved in various political groups and social club, specifically The Alliance Francaise, where she chaired several fund-raising events. Reine will be remembered for her charismatic personality and beautiful smile that always lit up the room.
Reine is preceded in death by her parents and her beloved husband, Otto. Left behind to cherish her memory are her daughter Arianne, husband Jim and her granddaughter Alexa, who was her pride and joy.
Funeral Services will be conducted on December 4th at 1:00 PM at the Arnette & Steel Valley Chapel in Cumberland Gap, Tennessee with the Reverend Lawrence Fultz officiating. Pallbearers will be Jim Welch, Bob Weaver, Jim Weaver, John Weaver, Auburn Pearman, Jr., Auburn Pearman III and Mac Pearman. Interment will follow at the Kibert Cemetery in Cumberland Gap.

All rights reserved. This obituary is also archived at obittree.com